I have read over 40 pages of notes and 6 sections of biology today. I have spent 5 hours in front of this durn computer studying and getting ready to pass my test. I go to take the test while all the info is still floating in my brain but guess what?

.... Blackboard is down. grrrrrr. I can't do anything with blackboard down. I can stare at a pretty screen, but that doesn't get me any closer to my test.

I know this sounds like a dorky post but I'm frustrated after half an hour of trying to get blackboard to load so that I don't lose the junk stuffed in my biology-defying brain. :(

This is a difficult week for me. LOTS of homework, several papers, all due by Saturday night. Pray for me friends.


What are you up to today?

do you hear howling?

If so, it's cause the Wolves put the hurt on! Lol. :) We have become football people. Yes, I fit well into the role of "football mom". David started flag football two weeks ago and today was their first game. The Wolves (our team) - vs - the Bulls. Although there is not an official score, let me assure you, our Wolves and their 6 touchdowns did a mighty fine job! David was unsure of what to do or how to play, but his coach found a job that suited him VERY well. The boy is a snapper. I want you to know, he snapped that ball straight into the hands of the quaterback every time! He is a natural. Each time the team "scored", he was on the snap. We parents were all unsure how the kids would do because this is each childs first year to play, first game, and they'd only had 2 practices. But boy did those kids play their little hearts out! And oh man are they serious about their football now. I see why football is so major in Texas. I'm so stinkin proud of the way David played today! He did everything exactly how his coach asked him to and he delivered when he needed to. He even managed to gain his team 5 yards by running the ball on one play. Friday night football may be huge in this awesome state, but I think I'm really going to enjoy me some Saturday afternoon football for a while. :) Here are some pics from Mr. Snappers first game:

the huddle - David is the short one 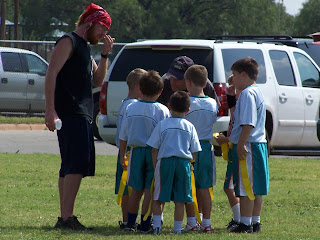 lining up - David is on the left 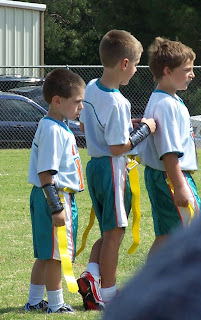 first snap of the game (David is in the white jersey), and oh yes, that's a "play holder" on the boys arm. 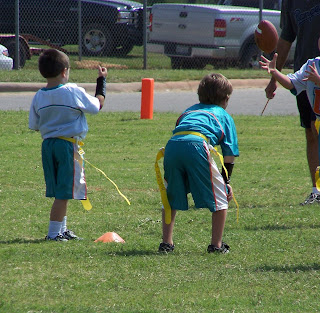 have you heard from my friend?

Debra and her family are in Houston and Ike paid them a visit this weekend. Have you heard from them? I'm putting this out there because I don't have their phone #. Well, lol, I have the cell phone #, just not the area code. Anyway, if you've heard from them, e-mail me please, dizzy4daizey@yahoo.com and let me know what you've heard. Last I knew their power was probably out, but we haven't heard much else. Debra if you reading this drop me an e-mail if you have time/power. We are praying everything is okay and that your house/cars are without damage. Love you guys!

Hurricane Ike hit Cazalle, Haiti hard. This is where the Rescue Center I've mentioned is located. Please please pray for Licia, the workers, and the children. I can't even imagine being in that situation. And please pray for Licia's sister Lori, their home is pretty much a total loss due to the flood waters getting so high. It is a mess. People have died. There has been little rest at the center. They were allready facing a water shortage and damage from Hanah, and now Ike has hit and left much much more destruction and loss. Go here for the full story. And please, please pray for the people of Haiti.

This is an update from Licia's blog - please continue to pray for the center. Right now there is no water line, no water reserves, and very VERY limited supplies. Please pray for God to move in a mighty way and help keep these children and family safe and healthy.

**It is beginning to rain here again.

**Reports on Haitian radio is 46 dead from the river here.

**They were three men that tired to cross the river up higher than our village and the river washed one of them down, a father of 5 children. They pulled the father out and laid him out front for several hours until the family came to retrieve the dead body. We learned that hurricane Hanna damaged his house this past week. He walked 6 hours down the mountains to try and find some work to feed his family. He knew it rained a lot last night and told his friends he was worried about his wife and kids. He was trying to get to them when he was killed. One of the volenteers here J.L. is going to be working on raising funds for his casket.

**A family here in Cazale was trying to get out of their house last night and the water washed the mother and two children away. They found the mother about 1/2 a mile down the road hanging onto a bananna tree. They have not found the two children.

**The water line is NOT going to be fixed anytime soon.

**There was a man that got his house washed away that follows in the clinic. He has a catheter in. The water washed away his house and ripped out the catheter. He got here today with a very swollen bladder, no catheter and no clothes. He was raising his hands thanking Jesus when we got it in and relieved his suffering. I got some stuff from Enoch’s closet and we got him dressed.

**We had a child die last night in the middle of everything, Herode. It was a challenge to get him buried today.

**My two volunteer’s were great last night. They helped me out SOOOOO much and I truly do not know what I would have done without them. When someone tells you “give me something to do, no job is to dirty for me” you know they are ready to help.

**I was scared last night, really scared. Some of the ladies were screaming, yelling and crying as they were so worried about their families. We had to calm them and get the children to safety.

**Amos, Henley and Trey did not know what was happening. They just thought it was cool they got to play in the middle of the night with so many babies.

this is too good 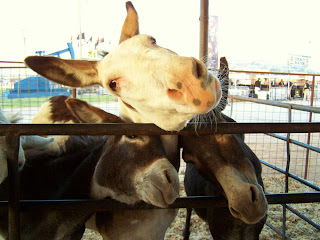 This song is so SO good I just had to post it again. :) Enjoy and let God lead you, wherever, whatever! Just let Him do.

Oh man. I just had to post this one too. How funny! This song meant LOTS to me in Jr. High. :) BF had a jacket JUST LIKE DONNIE'S. Swoon.

Okay, if you're a guy, I warn you now - gushy girlie-ness is about to happen.

NEW KIDS ON THE BLOCK WAS JUST ON THE VIEW!!!!!

Yeah baby!! The sang a new song, "Single", and an oldie, "Step By Step". And you better believe this NKOTB chica was steppin every second of that song! I'm so excited! I even found my old (OLD) cassette and am thinking of popping it in. Am I crazy? Maybe. But "Please Don't Go Girl" is on my mind, and it's about to be on my radio!

C'mon friends, I know there are some closet NKOTB fans out there. Where you at?!?! 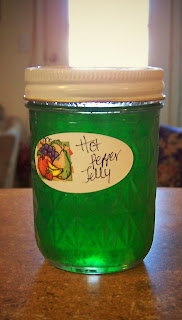 Okay. I tried something new. I found a recipe online for Hot Pepper Jelly that I HAD to try. It is H-O-T!!! I don't like spicy foods so I won't keep any of it, but of course had to taste it last night. Wow. It's good, but durn. Take it in small doses if you're not used to Texas jalepeno hot!

So I'm thinking these will make fabulous Christmas gifts once I get them dressed up with some raffia, ribbons, and fabric, BUT, what I would love to do with this first batch is help out a friend. Licia and her family run a medical clinic and Rescue Center in Haiti. Over this past year God has really burdened us for the children at the center. The men and women that serve there are nothing short of amazing. Currently they are raising funds to ship a semi trailor of supplies to Haiti, as well as raising funds for many of the children there to attend school. I would love to sell these jars of jelly and send the money to Licia for the center. So, here's the deal: I'm selling the jelly for $6 a jar (they are 8oz jars), plus $3 to ship them. $1 from each jar will help cover the supplies to make the jelly, so $5 from each jar will go straight to the Rescue Center. I will sell as many jars as I get orders for, so there's no limit. :) If you'd like a jar please e-mail me at dizzy4daizey@yahoo.com with your complete address and I will send you our PayPal information.

PS - Please note that these are all home-made and may have a slightly different taste than storebought. Most are a bit sweeter. Also, after shipping it helps to put the jelly in the fridge before using it to help it firm up. Sometimes the heat from shipping it causes it to loosen a bit. I haven't had issues with the seals popping though so you can eat it as soon as you get it, just if you want it to thicken, put it in the fridge. :) 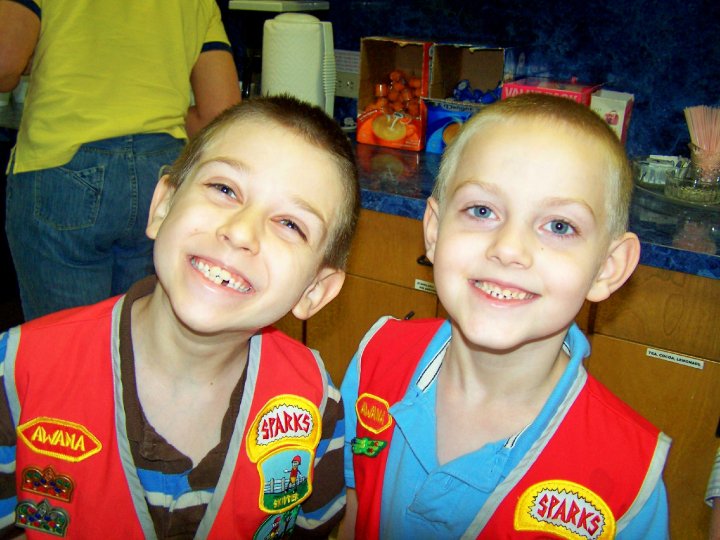